Today (though I’m writing this the next morning) was a good day. We had lively discussions in class and went over some interesting material with our professors. After that a group of us walked across the bridge and played some soccer in the park again. Playing around with the ball as we gathered to go we joked about the ball going into the river. Guess what happened next? Fortunately a soccer ball is something sacred here, and no less than three punts diverted to rescue our ball for us. Later on at the park we were joking about the ball going into the moat (yes, the moat) and what do you think happened next? To clarify, some of the colleges with property on the “backside” of the river have water channels going around them that connect to the river. They’re just about four feet across and at least three feet deep, I think, but they’re very discrete. Actually a lot of the buildings have archaic but nasty defenses around them, sort of reminding you of the history of the place, not to mention that the continued class system is in fact very real. Coming back from that a friend and I headed down to Regent Street to do separate things, and I ended up in the local Games Workshop store:

There I mixed in briefly with the locals, played a game of Warhammer Fantasy Battle with the clerk, and heard some very encouraging and authoritative rumors concerning new codices and plastic models for Warhammer 40,000 factions that haven’t seen any love in a long time. I found out they were doing a WHFB 8th Edition launch party this Saturday, so I think I will go back for that, maybe meet some more locals and whatnot.

Walking back I took a couple of pictures, just to have something to make my blog colorful. Or colourful, as it were:

I took some different streets home just to get to know the place, and ended up in front of King’s College again. This time I decided to do more than take a funny picture of a single statue, as the building really is quite impressive. This is the chapel, I think, and the rest of the college is off camera to the left. 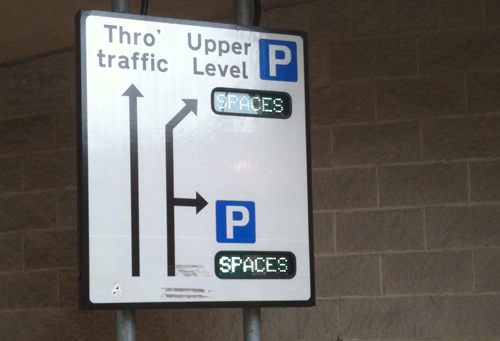 I don’t know why, but I found this amusing. In the States you get signs shortening the word “through” to “thru”. Here in England they do it properly, writing it as “thro'”. Words are neat to me.

The local market, despite being over run with junk and tourist trash, does have some neat stuff. Like an semi-amazing collection of reggae albums. This was the “under £10” section. I sincerely wish that bringing a record or ten back in my suitcase would be safe. I saw some really cool things at that store that I don’t think I’ll ever find in the States.

What we have planned for Friday is to check out the Hall’s punt and explore the city by river. We spent the evening watching rowdy tour groups of Spanish teenagers try to to each other off their punts and ramming one another, which was both annoying and funny to watch at the same time. The professional punters exhibited an amazing ability to expertly steer their craft full of paying customers through these knots of chaos upon the river as if they weren’t there. We wanted to check out a punt after the river calmed down, but apparently you can’t take the Hall’s punts out after 8pm. You can keep them out after, just not check them out after. That’s the plan for Friday night, anyway, and hopefully I will have some fun story that doesn’t involve us sinking the college punt to share.