OK, so my numbering system was off. “Day 1” was a Sunday, so that should help keep things straight. “Day 12” Thursday, the day we went to London to visit the Old Bailey.

So, right, Day 12. Today we went to visit the Old Bailey. But before that we toured the Templar Church and the Inn of the Middle Temple. This all has summat to do with the Knights Templar, and I will explain as best and briefly as I can. The Knights Templar built this church/temple thing:

At some point the Knights Templar were run out and the land seized by the Crown, and after that the site evolved into a social club/guild hall/school for lawyers thing. The temple theme was maintained, I guess, and two of the “inns” were named after it. We were hosted this day by the Society of the Middle Temple Inn, but more on that in a bit. First, the church:

This was our tour guide, and behind him are some mounted police, apparently special to the complex. According to the guide, this area is not part of London even though it’s surrounded by it. Our guide was pretty casual, exhibiting the curious demeanor I’ve noticed in other “working class” British in positions of authority. Sort of “belligerently friendly”, if that makes any sense. The first thing he did was to tell us how put out he was with Americans bothering him about “Da Vinci Code” tourism and what a bunch of nonsense the whole book was (this site was a location in the book and film). 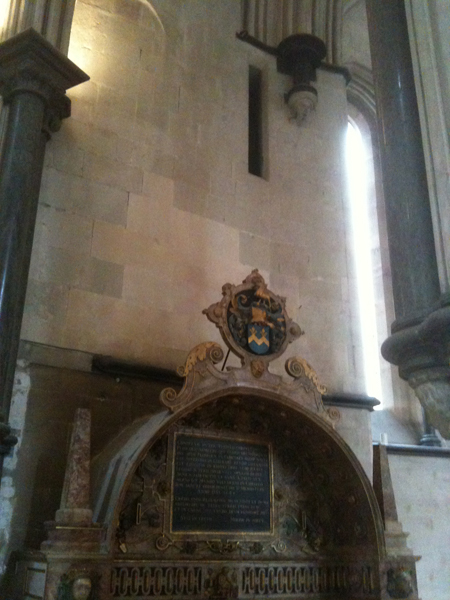 That slit-window up on the wall there, we were told, originally went to an oubliette, where the Templars apparently stuck some Irish bishop who said nasty things about them. Those are some hard folk who can listen to a man screaming for mercy or in despair while they slowly starve him to death for three months, in their church while they pray several times a day. 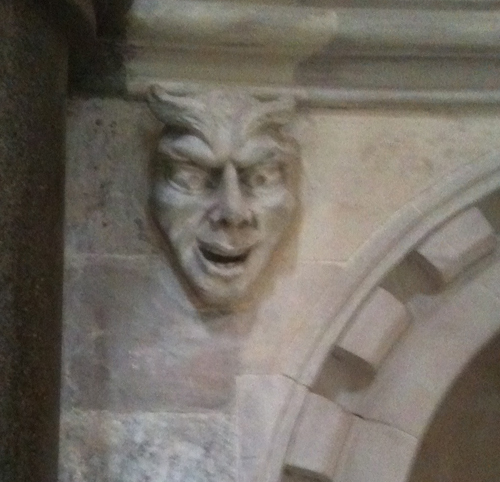 Ringed round the inside of the round part of the church were gargoyles. This one is “the Devil”, and the others are all sorts of grotesque. Here are a couple more examples:

Here is the old style pulpit in the church: 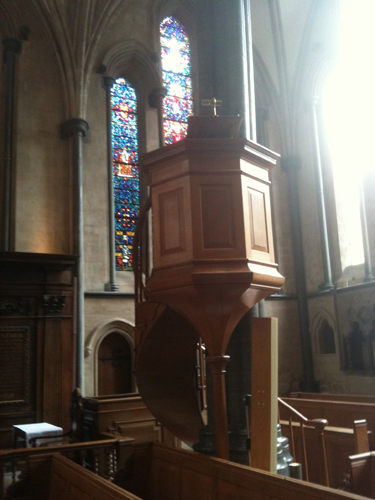 And here is the organ, which was a lot more impressive than turned out in the picture:

Here we are standing in front of the main gate into the Inn of the Middle Temple, who hosted us today: 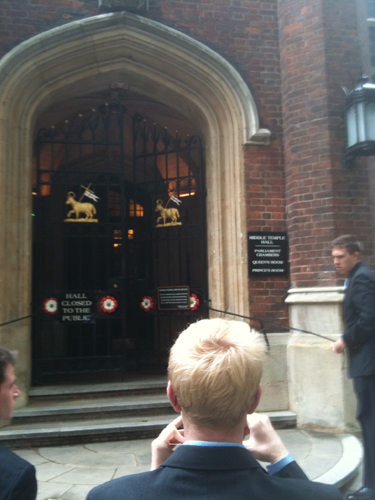 Guess who forgot to pack his suit jacket?

Anyway, our tour guide took us through the Middle Temple Inn and showed us all kinds of neat stuff I wasn’t allowed to photograph. Such as a table made from a piece of wood from the Golden Hind, which I wanted to touch but was too afraid to, along with an enormous table made from three pieces all hewn from the same enormous oak tree that was constructed in the dining hall and has never left in hundreds of years. It sits as the high table, and all sorts of monarchs and famous people have sat at it, including Elizabeth I, William Shakespeare, the afore-referenced Sir Francis Drake, and some of the current royals. I did touch that. They were originally going to have us eat our lunch at the head table, but the University of San Diego had a larger party, so we were at a different one.

But before that, we found ourselves in a parlor in the Inn talking with a woman of some rank in the Inn that was telling us more about the institution. I said earlier how the inns were “social club/guild hall/school for lawyers”, and that’s a fair assessment, I think. Lawyers in training are sort of apprentices here, and they mingle with the practicing elite here, chiefly through a series of obligatory social events. A lot of reputation is built and maintained or defended here, and it’s very much an “insiders” type of thing.

Oh yes, during the discussion of all this we were shown an example of the strange wigs that the lawyers and judges wear for criminal court sessions:

They don’t wear them for every court thing anymore, but they do still wear all that stuff for criminal and serious court. They do also wear a particular uniform for court appearances, even when not wearing the wigs and other fancy stuff.

After we ate lunch at the Inn of the Middle Temple we walked down to the Old Bailey. The Old Bailey is the oldest court in England, and is used for serious criminal cases from London and other jurisdictions who feel a centralized trial would be better. Everyone had to turn off their cell phones and hand over cameras before entering so, again, no photographs. Both places where we weren’t allowed to photograph were very, very neat. You’ll just have to trust me on that.

So we met a judge, Judge Brian Barker, who was a direct-exchange student to KU back in the 1960s. Among other things he showed us the Jayhawk statue he keeps in his office! But he took us to his courtroom and talked to us about how the modern British trial system works then opened the floor for questions. I asked him if he had any critiques, either positive or negative, of the US criminal system compared to his own. His answer was self consciously political, gently avoiding a clear answer, though he did make brief reference to a couple of things. He was a very nice fellow, easy to talk to, and who answered every other query or comment straightforward and amicably. Afterward he gave us a personal tour of the building, taking us into areas where the general public are not allowed, including an area that is more or less “a temple to the concept of justice”. He also showed us a piece of glass embedded into the wall that came from the first IRA car-bomb to be set off in England, that they left there as a sort of reminder.

After that the group broke up and everyone set off for their “long weekend” destinations. I had an anytime return ticket to Cambridge, so I walked around with a couple of my classmates for another couple of hours. We walked down to the Tower of London and the pier there, so I took some pictures:

Statue of Queen Anne, surrounded by goddesses I could not identify, along with some tourists who I did not know. 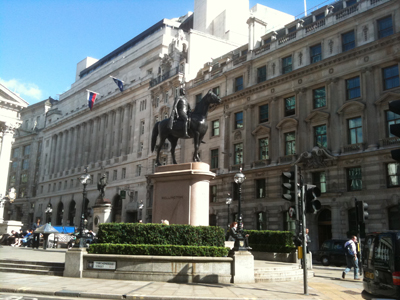 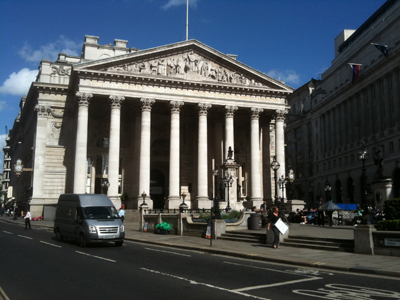 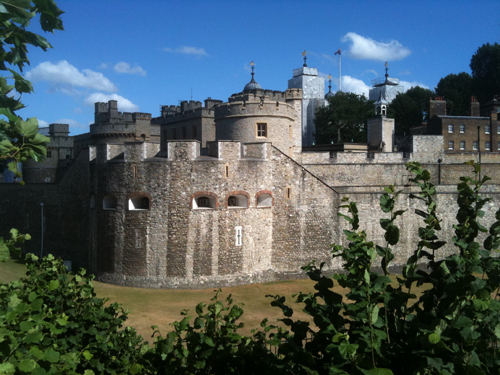 London Bridge (I was told) as seen from the pier near the Tower.

From here the three of us who were still wandering around together made our way to the nearest tube station. Two of us found ourselves back at King’s Cross where we retrieved the things we had checked there (his bag and my pocket knife) and from there I found an express train back to Cambridge. I was thinking I might go take a picture of “Platform 9 ¾” of Harry Potter fame, but I was just too tired to go find it. I’m not a big Harry Potter fan anyway. And I had been walking all over London in dress shoes and just wanted to get on the train so I could sit down.

One more thing, though. Outside the train station in Cambridge there is this:

Bicycles. Bicycles everywhere. They’re rather expensive here, with the fancy fold-up commuter bicycles going for £700 (that’s over $1000), though you can get cheap Chinese mountain bikes at the mall for £50.

From there I simply walked back to Trinity Hall with a brief stop at a Subway for a sandwich, and called it a night with an early bed time.