This evening I sat down with my new Robotech Tactics game and had a go at building one of the models. I selected the Destroid Tomahawk model, because this mecha has always been one of my favorite designs. I also wanted to carry it to the game store tomorrow to have something to show my friends, and this is a familiar design to many people.

To start off, there’s a lot more parts to these minis than is strictly necessary. The Kickstarter comment section had a lot of backdraft blowing through it, and I understand the bitching about seams and mold lines caused some of the delays as the Ninja Division people did their level best to eliminate them as much as possible. Of course this meant more parts. Honestly, I would have rather spent a few moments using the edge of my Exact-O than deal with the extra headache of small, fiddly bits, but nobody asked me and I didn’t want to get involved in the silliness of the discussion.

So here is the picture of the parts freshly clipped from the sprue: 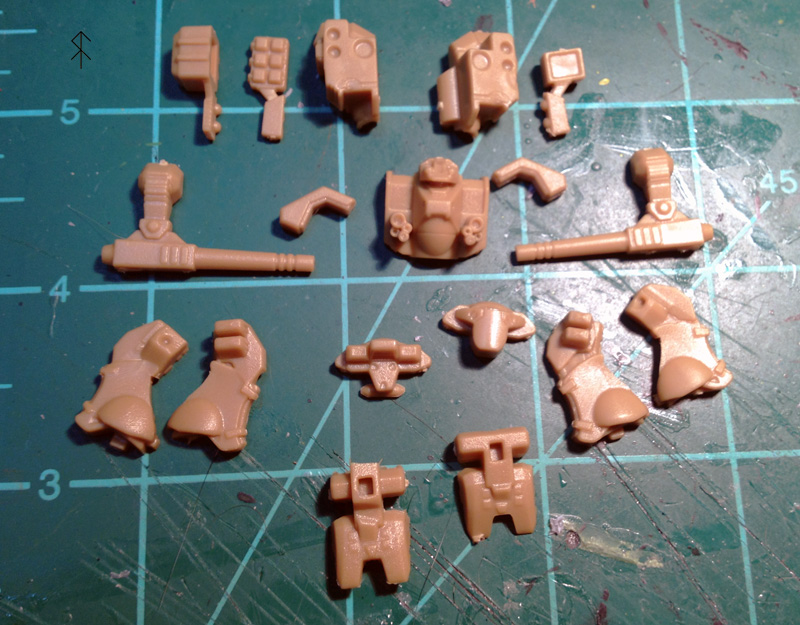 I didn’t really look at the instructions, but there isn’t much in the way of instructions to begin with. This is probably my prime complaint here, but I’ll get to that in a minute. Below is the torso of the Tomahawk. I knocked it out in maybe five minutes. For this I’m using nothing but an old Exact-O and a mostly used tube of Loctite Super Glue Gel. I wanted to prove that it was easy, mostly, because there’s been a lot of angst circling this game and everything about it, so this is, “here, I did this with what most people could find in a kitchen junk drawer.”

The problem I have with the instructions is two-fold: they are vague, and the parts aren’t numbered. The vagueness first hit when I first looked at the missile bits for the torso. I had to do a double-take and actually look at the instructions, but it didn’t take me long to figure out that there are two styles, two of each. So you’re either going to have one mecha with both hatches open and another with both hatches closed, or you can have one and one of each. A very minor complaint: I would have preferred to have the option for both styles on both Tomahawks on the sprue. Really, though, for someone who has done this sort of hobby modeling for a while, the closed hatch at least would be easy to just make out of putty, and the smaller hatch-open pieces would be easy to self cast, if you really wanted to have two with both hatches open. 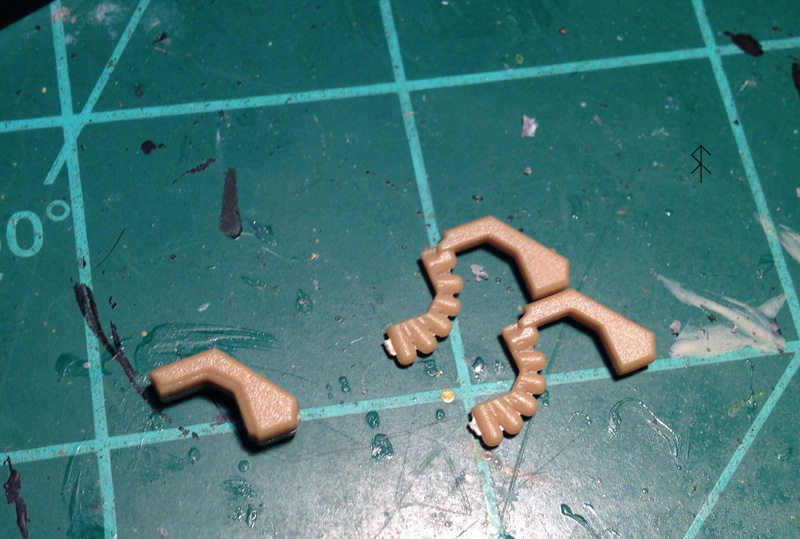 Like the torso missiles, the particle cannons have two different pose styles. The instructions show the arms as being two pieces with the cannon able to swivel, but apparently that was victim to one of the many mold changes. Not a big deal. 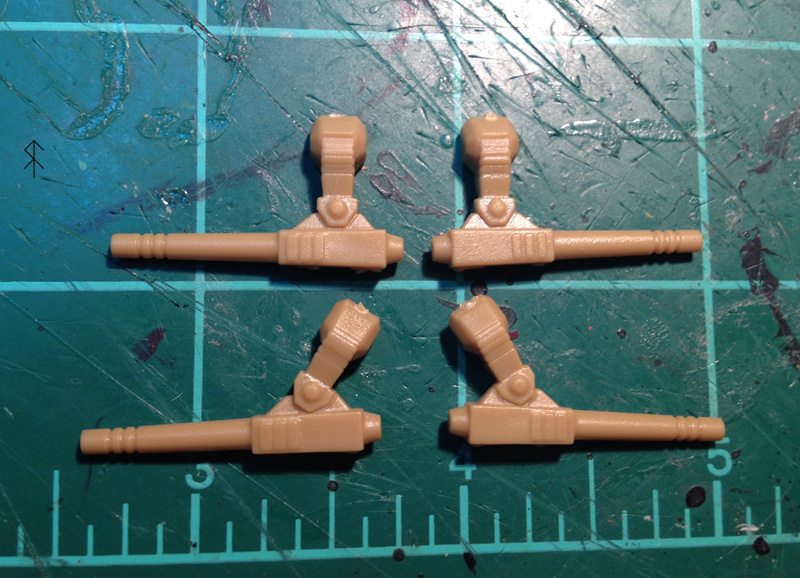 The legs and feet is where things go wonky. When they repackage these for general sale I sincerely hope that they include better instructions regarding this train wreck. Numbered parts here would be a great help. There are four different feet styles, and two sets of legs, and I didn’t know how they were supposed to match up. Figuring that part out took about as long as the rest of the assembly steps altogether. Maybe if I had paid closer attention when I was clipping parts, but I didn’t just clip bits helter-skelter, either. I wasn’t sure even when they were on the sprues which ones I should cut off or what the difference between them was. It took me until the dry-fitting to fully realize the extent to which the feet were different from one another:

There was a lot of guess work involved at this stage. I came up with what I thought was the best arrangement and took a photo:

Honestly, though, I’m certain that in between swearing and gluing my fingers to everything the above arrangement was probably modified. But I got through it, and managed to get the damn thing posed and glued together: 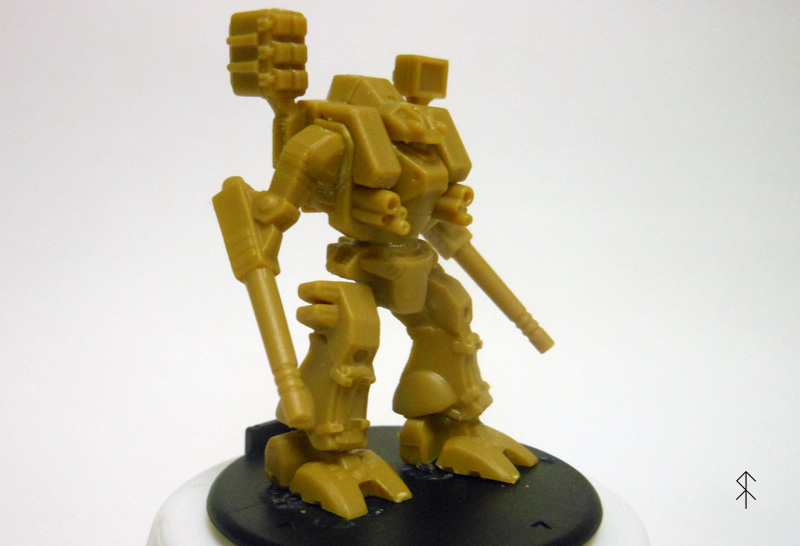 I was going for the pose from the Loose drawing out of the old Battletech Technical Field Manual 3025:

I couldn’t get the legs the way I wanted. I’m not sure it’s possible, but maybe it is. The hip joints are the weakest part of the design, and the most aggravating part of the actual assembly process. I think even if it were absolutely clear which leg matches which foot, gluing the legs to the hips would still be maddening. I’m not even positive the torso isn’t going to fall off or rotate forward or back by the time I wake up tomorrow. I guess I’ll update this if it goes sideways any time soon, but I think that sooner or later I may have to re-glue the legs to the hips.

There’s a few mold lines I want to scrape off that I skipped when I was putting it together, but I want to wait until the glue is dry and I’m ready to paint. I’ll do another one of these blogs when I’m doing the paint, maybe next Friday. I have a 40k figure I need to paint for a competition, so I’ll probably do them on the same day. I also need to buy some good primer. I think the spray paint I normally use would probably be too thick for the details of these.

So that’s that. I will do one of the Veritechs (all three poses) at some point, hopefully soon. When I get enough of the models done I’ll maybe play a small skirmish with a friend and do a battle report and review of the rules.