Another year gone, another blog post about it. This year wasn’t nearly as productive as 2012, but we all have our slow periods. I have a good feeling about 2014, and as always am excited about moving on to the future.

I guess the coolest thing that happened this year is that I made it to the MWKF tournament in Chicago again. I got my first tournament match win, and passed my shodan exam.

I helped out with the 435th Dust Warfare Club’s demo games at the Recruits convention in Kansas City. The most important thing about this is that the 435th has sort of morphed into a design collective, and we’re making our own tactical skirmish game with the intent to publish. There will be more updates about that in 2014, for certain.

The family’s 2013 Yule Wreath. I haven’t done as much with the local Heathen community this year, but family is the all-important aspect of it as an outlook anyway.

Now for the obligatory stats:

If I had to guess, I would say that it was the Straight Outta Comicon guys searching themselves on the net, but who can say? 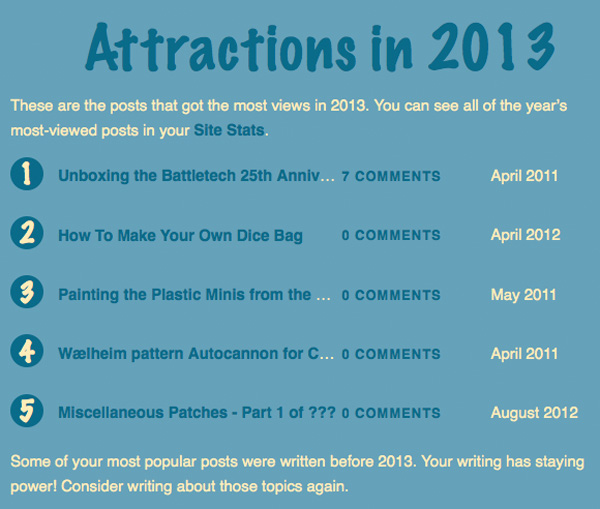 By “some” they mean “all.” I really didn’t post much on the old blog this past year. Nobody is really interested in my movie or book reviews, unless it’s the one on Ben Franklin, which I suspect is mostly kids doing homework anyway. 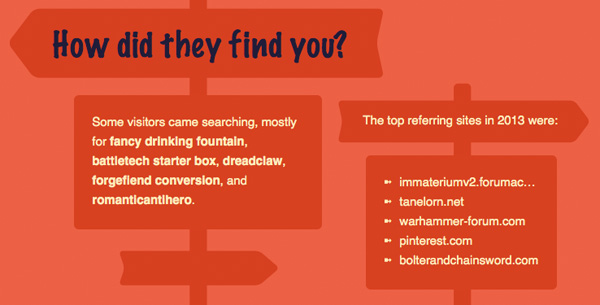 “Fancy drinking fountain?” I have no idea. It does not surprise me that everything else about this picture is gaming related, though. Wait… Pinterest? What is that about?

I’m going to go out on a limb and say the one guy looking at RA from Afghanistan is a British or American soldier looking at 40k stuff. Pakistan? Now that one is a mystery to me, unless it was the short blurb I wrote about religious extremism in India. Which is probably why India is also sort of blue. China? I honestly don’t know. Pacific Rim was a popular movie there from what I have heard, so maybe it was that post. Or 40k, because that’s a global interest, really. In fact, it’s most likely that anybody looking at this website is trawling the internet for 40k conversion pictures.

Yep, numbers going way down this year. That happens when you forget you even have a blog for long stretches of time. I’d like to image it’s because my clever and deep webcomic “Iron Lawyers From Mars” is on an unofficial hiatus, but I know that it’s only ever got views because I only really updated it when I was living in England back in 2010, and it was confusing my parents and friends back in the States who wanted to know what I was doing over there.

Escalation came out in 40k this past year, giving me a reason to finally start assembling this. I’ve also started Gunpla as a hobby, which currently consists of buying kits and putting them on the shelf. Sort of like my model helicopter hobby… I’ve done some good reading this year, but again, not as much as I’d like. Writing? The only things I’ve written this year, outside of my kendo exam paper, were related to the skirmish game I’m part of developing. I can’t show anybody that stuff yet, but I can’t wait to get that stuff out there. Hmmm… I also wrote some things for an ill-fated web magazine this past year, as well. Two articles on gaming that I thought were pretty good. Unfortunately that project petered out, because I think all contributors realised that working for free wasn’t as fun or rewarding as we thought it would be. Maybe I’ll post those articles on RA for posterity, since I still have them.

What to expect in 2014? More movie and book reviews, more modeling and painting posts, exciting updates on the 435th Design Group project, the usual kendo annual events, and at least one short story and one poem (which is a promise to myself more than to readers.) I’d also like to get around to redoing my Budo and Heathen Gods sections of this blog. What I want to do with those keeps changing as my focus changes. It’s going to be a lot more personal and less theory related, but it will be there.