It might seem like I’m going crazy with the photographing of patches today, but these have all been sitting in a folder on my computer for a long time, so while I’m here I might as well work on the back, yeah? And again: just what it says on the tin.

Hail to old KU! I recently graduated from the University of Kansas (!More on that soon!), so of course the first patch I want to show in this section is the Jayhawk. This patch comes with a generous felt edging that for some reason really only looks appropriate on collegiate mascot patches and large back patches.

In 2009 I graduated from JCCC, and before I left I snagged a patch from their online store. I don’t think I ever saw anybody who wasn’t grounds crew wearing a patch like this, so I’m not sure why it was in their bookstore inventory, but whatever, I got one without having to steal somebody’s work shirt…

I had a really nice Guinness patch that I bought… somewhere in Lawrence? I got rid of that patch during one of my “I’m going to quit drinking forever” phases. But I can’t quit the delicious dark stuff, and wanted to replace it eventually. There was a period where it was impossible to get Guinness patches, however, due to some kind of licensing shake up, but I got a new one anyway. Or an old one, that is. A friend of mine gave me his old flight jacket, and there was this old Guinness patch you see above. I don’t remember exactly what happened to the jacket, but I know a few of the patches from it are still in my collection.

Boulevard Brewery, Kansas City’s own regional beer company, and makers of one of my favorite beers in the whole world: Bully! Porter. The patch isn’t all that great, being small and impossible to put a needle through, but from a company I support and of local interest, so into the collection it went.

U.S. National team patch, which I bought from a place in Korea through eBay, of course. It’s the way of the future, I tell you.

I think this was the second logo for Kansas City. The first one was similar, but said “Wiz” instead of “Wizards”. Both were equally stupid, and I was glad when the logo changed to emphasize “Kansas City” instead. I was even more pleased when the club changed to “Sporting Kansas City” and dropped the shitty and childish Wizards theme entirely. I haven’t yet acquired a patch for the new logo and name, but it will come eventually. This patch above was cut off a baseball cap, just because nobody makes patches for football teams that I am aware of, or at least didn’t back then if they do now. 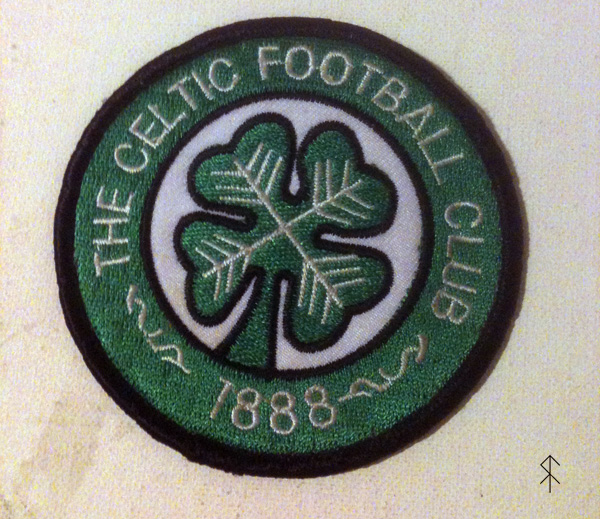 I am not now a Celtics fan, but I used to be. When I lived in Florida, which has a crazy amount of British and Irish expats and vacationers, I went to watch live broadcasts of SPL with the local Celtic supporters club. It was fun, but these days I keep my fandom local. There’s a lot of screwy politics and identity issues that go along with club support, and I want none of it.

Another thing I did in Orlando was develop an interest in rugby. I wasn’t a fan of Orlando RFC, I joined the club as a player completely new to the sport. I still couldn’t claim to know much about the game, but I sure enjoyed my brief membership, which was maybe six months? If you’re curious, I was a forward on the B-side. An alternate forward on the B-side, because I had no idea what was going on. But it was lots of fun. At the annual dinner I received this very neat patch, which I guess would have eventually gone on a club blazer had I stuck around. I didn’t stay in Orlando, though I tried to stay with rugby, but there is just no way I could continue with it after I started doing things like falling off scooters and landing on my knees. Kendo isn’t nearly as hard on the body as rugby was.

Playing is always better than watching, yo.