Another year, another Japan Festival!

This is definitely one of my favorite things to do in the year, something I always look forward to when the summer nights start to cool off and the campus bells remind me that it’s Autumn. Here’s members of the Kansas City Kendo Club eating traditional Japanese festival food in the crowded Regnier Center. There were several vendors represented, but I opted for JCCC Dining Services. I am a Cavalier alumnus, after all.

Lots of workshops, though once again I only did the martial arts stuff. I highly recommend the other cultural activities, however. Here’s Ginga Dojo, the iaido group that I am ostensibly a part of, toward the end of their workshop. I haven’t had time for iaido, plus it’s been sort of depressing doing iaido with a bokken because my iaito was stolen. I hate lowlife thieves, but there it is, I need a new iaito and I can’t afford one just right now. But it was nice to see Egan sensei, who travels up from Texas (I think) just to do this festival, and Andreson sensei, who heads the local branch of MJER, an authentic koryu.

This was fun to watch. They had these sumo/fat suits like on Takeshi’s Castle/mXc and they were letting people get into them and play. It took forever to get these shots, however, because in our litigious society nothing can happen without waivers. There was actually real sumo going down this year, which was very cool. The headliner was this fellow who’s over 600lbs. and not only does he not need a Rascal, he can kick your ass. I regret that I couldn’t last to watch the evening match, most especially because I missed the sumo demo at the St Louis festival last year (or was it the year before?) But man, I was beat. Sunday I could barely function…

This was in the cultural display room, the Virgina Krebs room, named after the late wife of my Eastern Civ professor and all around nice guy, Professor Fred Krebs. The kimonos were beautiful, the Boys Festival dolls were cool, and the samurai armor was neat… but all I could do was look at the temple models and calculate the scale in my head, imagining them as 40k terrain. Something is wrong with me, but that’s what the hobby does to you.

For a donation you could make a paper crane to add to the tree. Or you could just give them money, which is what I did. The crane folding was in a different room that I didn’t know about, and the lady said I could go there and tell them I gave money already to let me make a crane, but I was on my way to go photograph the martial arts demos when I did this. It was for the 1000 Cranes Project, which is raising money to help out with those who suffered in the Sendai tsunami. 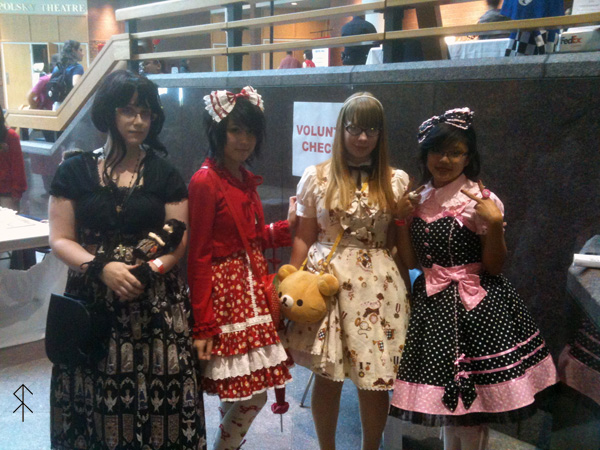 Some Lolita cosplayers. Or are they a subculture instead? I think they’re a subculture in Japan, but unless you’re wearing your Lolita clothes all the time aren’t you just cosplaying? I don’t know the rules to that sort of thing, or even what these girls get up to outside of the festival, but they had the best costumes there so I asked them if I could take this picture. You know, I really don’t think that whoever decided that Lolita was a good name for this subculture had read any Nabokov, but whatever. 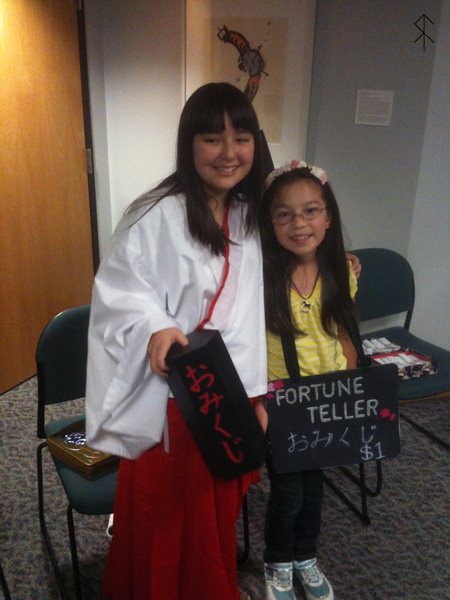 You can’t have a festival without shrine maidens reading your fortune! The girl on the left is wearing the traditional clothing of a miko. I heard a funny story this weekend about some kendoka who thought they would be cool and different, so bought white gi and red hakama, having no idea at all about miko. Probably apocryphal, but still interesting. I did not get a fortune stick, in case you were wondering.

KC Kendo during the martial arts demo in the Polsky theater. I participated in the workshop but opted out of the demo. My knees are terrible, that stage is hard, and I just couldn’t kneel through another demo so soon after the KC Ethnic Festival last August. Man, I really need to get that stupid knee surgery. 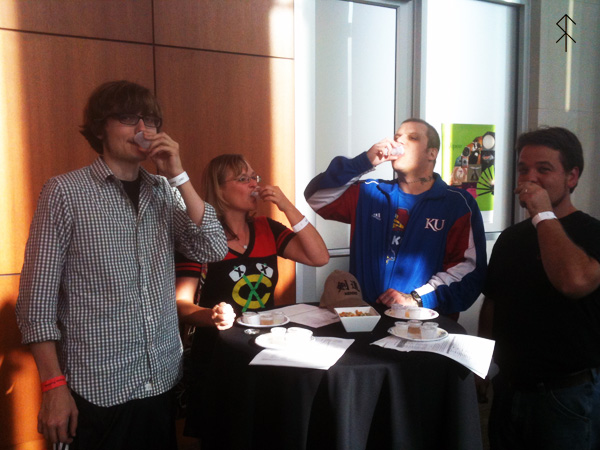 Over at the Regnier Center they were having a sake and Japanese beer tasting thing. The beer they have is stuff you can get at most well stocked local liquor stores, so there was no way I was paying $4.50 for a bottle. The sake samples were $8, but you got to sample stuff that you would have to otherwise buy a whole bottle for and a lady came by and explained about each brand and all that, so I thought it was much more worth it than the beer. KC Kendo likes to party responsibly, but it’s a life’s mission of mine to get Brian sempai faced. I’m going to get him eventually…

I have no idea what this guy’s story is, but this is a good picture to end with. For more pictures from the 2011 Greater Kansas City Japan Festival you can visit my new ShutterFly account and visit the album I made just for this event. I think that is where I’m going to put my photo albums instead of Flickr.

Anyway, it was Part 2 of a busy three part weekend, and the single biggest thing I did. I was tired, sore, exhausted, beat, and all kinds of other similar adjectives. Brian and I cruised through the bazaar one last time before I made my way home, and I picked up a couple of items to round off my loot from the day. It was, as always, a great festival!