Having got into a rhythm of life again after settling down and squaring myself away, I found myself once again at the Kansas City Ethnic Enrichment Festival, just like last year and the year before that. 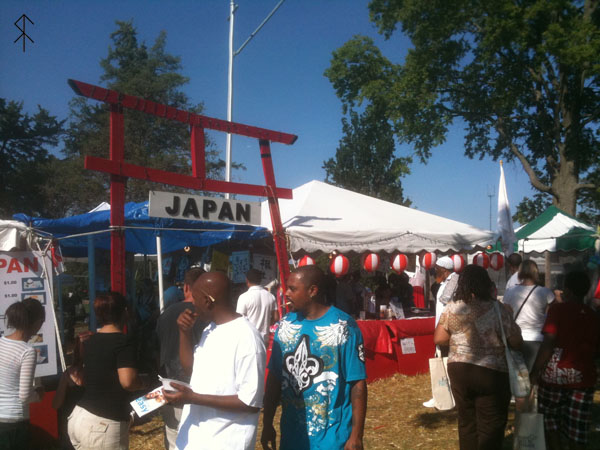 Once again the Kansas City Kendo Club was hosted by the Japan-America Society, of which I am involved with both organizations. The 2010 report linked above does a fairly thorough job describing what this event is like, so I won’t repeat any of those details here. I will say again, however, what an awesome festival this is, and I can’t recommend it enough. For the kendo demo we had so many people that we filled the entire length of the stage. All those people also meant that I spent that much more time on my knees (and my very bad knee, which still needs surgery) and the stage they set up at this event is as hard as any I’ve ever knelt on. The pain in my knee, combined with the near full muscle exhaustion in my buttocks from kneeling in a raised position to keep stress off the knee, occupied my mind so much that when it was my turn to stand up and demonstrate a waza I forgot that I hadn’t put my kote on. Drakey sensei had intended us to show how to hit the kote, of course, but he didn’t call attention to my error. Good guy that he is he allowed me to maintain face in front of the audience, and since my partner in this had no armor it worked seamlessly into a demo of how guys without armor can participate in practice. I didn’t even realize it until my second time to get up I almost stepped on the kote, stopping to put them on for a one ippon match against Shane.

So all that went down fairly well. I had somewhere else to be that day, so I didn’t get to stick around and sample all the delicious food that they have there. I also heard the rumor that this would be our last kendo demo at the festival, at leas for a bit. Each country only gets one cultural demonstration, and we’ve been doing this a long while. The Olathe Ki Daiko group, shown here in this video from 2008, often demo at the same Japanese cultural events that KC Kendo does, and are who is rumored to be taking the Japan spot over from us. They are always a popular group with audiences, and I always enjoy watching them myself. If you read this before the 24th of September you should head over to the annual Greater Kansas City Japan Festival at Johnson County Community College and catch one of their concerts or workshops. Or for any of the other good reasons to go to the GKC J-Fest, which are many and varied.

Pictured above is my first practice of the semester with the KU Kendo/Kumdo Club. Though my knee makes it very difficult to practice sometimes, I look forward to another year. Participating in club life at KU has helped make my school experience a great one. Out of the several clubs I was interested in and tried out, the strain on my time has forced me to accept that the kendo club is my only real club. While I look forward to graduating, I know I will miss the KU club (though I could still participate as a guest, and probably will from time to time). 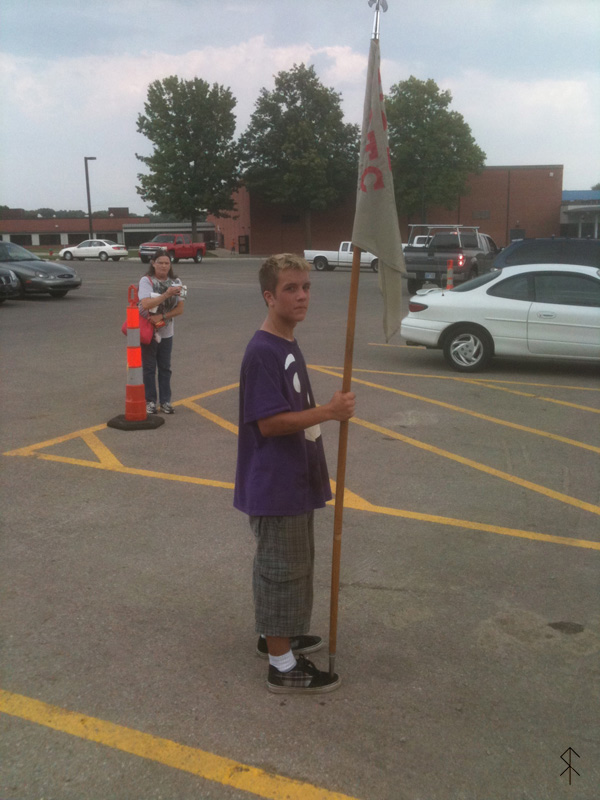 This is my son Donovan, of whom I am very proud. He is a member of the Leavenworth JROTC Pioneer Battalion, and this was taken after the obstacle course event for their Organization Day inter-company competitions, of which I have some pictures on Facebook. That event was really fun, and everyone was exhausted at the end of the day. They started off with a dodge ball competition, and the winners faced the parents and cadre in a fun game that ended in a bench clearing free-for-all game. All the kids were really enthusiastic and everyone looked like they were having a great time. This is the sort of thing that makes all the diapers, thrown food, tantrums, and other frustrating child rearing experiences worth it, this sudden moment when you realize that your little boyo isn’t so little anymore, but has been replaced by a fine young man. Good stuff.

This is Drífa and Tomo, my feline companions. They are all tuckered out from rampaging through the house and wrecking anything not screwed to the wall or hidden behind a closed door. Included here because, hey, I like them.

So that’s a summary of what it’s like to end the Summer and start the Fall around here.