Now that I’m back on two wheels (posting about that soon) I can go riding with friends again! I’ve been off the streets for too long, so I rode my new bike to Johnny’s BBQ in Mission to meet up with some old friends to eat lunch and ride out together to the 10th Anneal Greaserama car show, hosted by Los Punk Rods car club.

Meeting up with friends on scooters, some I’ve known for years, some I made that day: 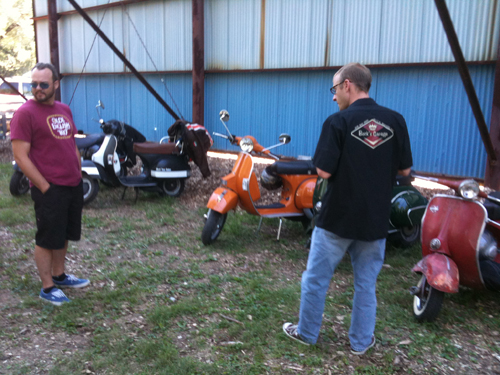 Matty and Paul, shortly after having wedged our scooters through all the highway cruisers to get to the shaded spot behind the drive-in screen.

That’s my shiny new orange Stella there in the middle!

I’m going to post representative vehicles here on RA, and then probably just toss the rest. Because I took a lot of pictures, and even though there was a lot of cool stuff there it got repetitive real fast. So yeah, up there that’s a “basic hot rod”.

And a not-so-basic hot rod. I think this was the lowest rod there. I’m pretty sure it was actually sitting on the ground. It was really hard to tell, as there were a few cars that were really, really low.

Los Punk Rods CC are more of a “kustom kulture” type group, which is more or less punk rockers and greasers violating old cars, torturing them into an entirely different aesthetic of cool than any previous generation imagined, but there were a few cars that were straight out clean restorations.

Speaking of Los Punk Rods, they had an area taped off so that they may demonstrate their DIY ethic, chopping up and welding a car in front of a crowd. A lot of the guys there were DIY folk, used to sawing, hammering and welding on their own stuff. Back when they started it was just them and their friends, but now, ten years on, they get a lot of general public in to have a look.

As a club Los Punk Rods were raffling off this car, which the sign on the window said they were going to customize there at the show, I think.

There was a lot of silly stuff there, because when you’ve got folks who can weld and cut sheet metal and work on motors, and who drink a lot of beer I guess, you get hot rod barstools and motorized Radio Flyers.

This guy summed up the main theme of the event. 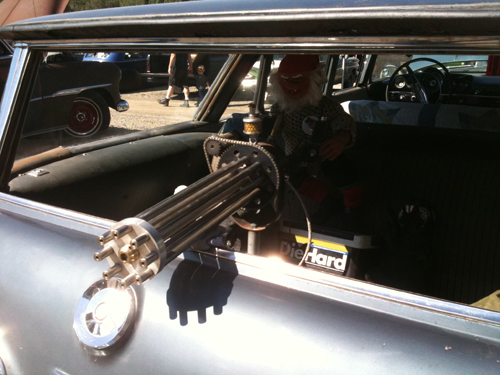 I didn’t stop to ask, but I’m pretty sure (from the airsoft pellets in the hopper and the air hose coupling) that this actually shoots stuff… 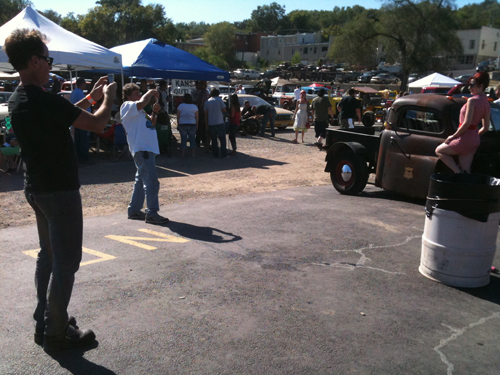 This stuff always cracks me up. Around tricked out cars you always get tricked out chicks. The dudes all go for a “I’m just going to get grease and welding sparks on it anyway” look, but most of the girls there were going for the “burlesque” or “pin-up” look. As a rule these girls love to pose for pictures, but I thought the random dudes taking their pictures was a more interesting subject.

Custom rod idling through the heavy crowd in front of the row of merchant booths. If you want to buy clothes that will get complete strangers to take your picture or PBR related kitsch for your garage or den, these were the people who were selling it. 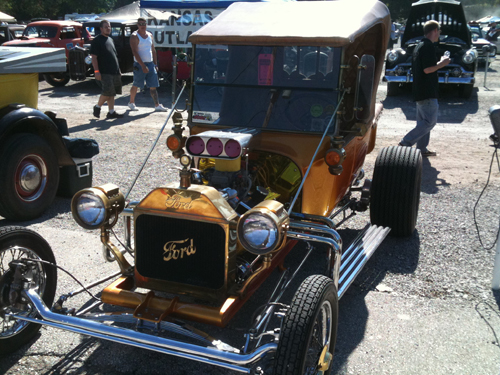 I liked this guy’s homemade… camper?

Because I mostly just care about scooters (the cars are cool, just not my thing), here are some scooter pictures to end this thing. The above is a Cushman, Vespa’s butt-ugly American competition back in the old days. Now they make golf carts, lawn equipment and such, which frankly, wasn’t much of a leap for their design department.

Here is a Pidgeon scooter (no funny anecdote about them…) that was for sale for what we all agreed was a reasonable price, though nobody wanted it.

And that’s all I care to risk my bandwidth and storage space with.

After the car show those of us who were left rode out to Dayna and Paul’s house for a couple of drinks and shooting the breeze, and after those pleasantries I scootered on back home, happy as could be!