Pizza & Politics: Newt Gingrich hosted by the Dole Institute at the University of Kansas

Wednesday, 4Nov09, the Dole Institute for Politics at the University of Kansas hosted former Speaker of the House Newt Gingrich as part of its “Pizza and Politics” forum series. I arrived early and met with the KU College Republicans, then sat down and had some pizza. Interestingly enough, I started the afternoon off with an encounter with a ninja. There was a freshman there who I hadn’t met before who said he was the president of the North Kansas City H.S. Young Republicans, and from a little forced chatter I learned from him that he was a “nationally ranked” martial artists in something he called “Hogo Hito”, which included ninjutsu, kendo and a couple of other things. He was taught for fourteen years by a Japanese master who he looked upon as his father, was taking first semester Japanese currently at KU, and vigorously declined my offer to accompany me to the KU Kendo Club this evening because what we do is not as hard core as the full contact sparring with bokken he learned, because he master thought that to win in real fights and to learn how to truly kick ass you needed to feel the pain of being beat up all the time. Anyway, this is all before Mr. Gingrich even came in the room, and is really just an aside. 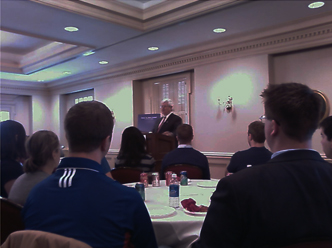 Mr. Gingrich came in and gave an interesting and humorous opening speech before opening the floor to questions. He started off with the direction of recent elections, and brought it to compare with the “Republican Revolution” of 1994. His focus was on President Obama, and whether or not the Presidents reactions to the people would be like that of President Carter or President Clinton. His premise was that President Carter was a hard ideologue who refused to learn from his mistakes, costing him his landslide loss to President Reagan, while President Clinton reacted much more intelligently to the anger of the people and managed to gain a second term by working with Republicans and compromising. 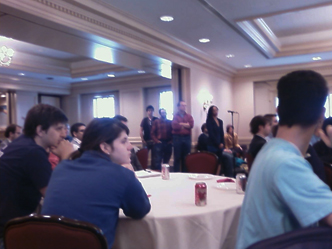 The Q&A period was interesting as well, with fans of Mr. Gingrich as well as the KU College Democrats posing questions of policy. I had the idea to ask Mr. Gingrich a question myself, based off a question from another student about Republicans cutting across racial and ethnic lines. What I meant to ask was an intelligent, thought provoking question about the inclusion of non-Christian conservatives in the GOP, specifically in reference to the recent news issue concerning Republican Dan Halloran, who I mentioned in my previous post. What came out was garbled and confused, and I don’t think I got across quite what I wanted to. Mr. Gingrich has published on the subject of religion and the founding of the United States, with his position being that the U.S. is a nation founded on Christian principles, and that our freedoms come directly from God, who he apparently interprets specifically as Jesus Christ. That’s an assumption of his position based on his answer to me, because I haven’t read his book. In my question I mentioned the changing religious demographics of the U.S., and the first part of his response was that the Obama administration was exaggerating the rate of change, and that the U.S. was overwhelmingly Christian and would remain so for a long time. He then stated that anyone who didn’t understand the core principles of the U.S. wasn’t to be trusted and would not get his vote, and I’m struggling to put that into the context of my question. He had asked me for a clarification of Dan Halloran’s religion and what I meant when I mentioned that it had been smeared in the Village Voice, and then something about whether I meant pagan from a historical perspective. What I should have asked as a follow up question, but I was too flustered by being at a microphone in front of a bunch of strangers to, was if what he meant was given a candidate who matched conservative beliefs in his stance on the issues with every respect but to his religion, based on being a non-Christian (or non-Jewish, presumably as well) alone, he would still not trust that fellow and refuse to vote for him. I may try to find a way to follow up on that, I don’t know. Based purely on the answer and attitude of such today at the forum, it did indeed sound as if this were the case. Maybe I’ll email him for clarification, because I would hate for that to be the case, even as I reference the aforementioned (in the previous blog) uphill battle as a non-Christian Republican.

To back-track a little bit, when Mr. Gingrich was answering the question that inspired me to ask my own, he did use inclusive language that included the phrase, “I don’t care what god you believe in or if you’re an atheist”, and then when answering another question went on to describe himself as a “majoritarian conservative”. He also spoke that he was “not for exclusions or purges”, based on a question posed about socially liberal Republicans. The focus of that question was from a Republican student from San Francisco, who “discovered” she was a Republican based on her idea of limiting government, and was asking whether Republicans might shift away from social issues like homosexual marriage and abortion in order to focus on free trade and taxation. On this particular aspect, Mr. Gingrich answered that the conservative voters themselves would not budge on those two particular social issues. One of the key points of his opening statement about Mr. Obama’s political future was that he would lose big time if he stuck to his progressive radicalism in the face of a stubborn electorate. Another student asked if maybe the Republicans hadn’t done the same thing with President George W. Bush, mirroring Mr. Gingrich’s comparison of Carter and Clinton with Reagan and G.W. Bush. I suppose that it remains to be seen, for as clever as any politician sounds talking to students by himself, politics ebbs and flows, and the Republicans were swept out to sea in the last election. There is definitely a backlash going on in local elections around the country as I write this, but will the Republicans be able to carry that momentum to 2012, or even to the 2010 mid-terms? Independents weren’t happy with the G.W. Bush administration and revolted, and they appear to be revolting against the Obama administration’s “health care reform” issue and the still sinking economy. And the economy, I’d guess, is where this will all hinge. Reagan famously asked, “are you better off than you were four years ago”? That’s a question we’re all going to be asking ourselves in 2012.

I sent the following email asking a follow-up question to his website:

“Mr. Gingrich, today at the Dole Institute of Politics’ “Pizza and Politics” forum I had the opportunity to ask a question about the inclusion of non-Christians in the future of the conservative movement/Republican party, and mentioned Republican Dan Halloran’s run for the City Council of New York. I believe that I developed “performance anxiety” at the microphone, and didn’t phrase the question as well as I would have liked. Based on your response, I have a follow-up question I’d like to ask you for clarification. You stated that you would not vote for someone who didn’t understand the founding principles of this nation, and by the context of the discussion I assumed you meant your position that the founding principles of the nation are Christian. Earlier in the Q&A period you made the statement in response to a different question to the effect that you didn’t care what religion a person was or even if they were an atheist. You also touched on the fact that you were not for “exclusions or purges” of the party, I think in reference to moderates or socially liberal Republicans. In order to clarify the answer to my question, and to reconcile what I think I understood you to be saying with the above statements, would you support a fellow Republican who was not a Christian or a Jew (not nominally worshiping the god of Abraham), but who held to a theist doctrine of a different ethnic tradition (such as a Hindu who named Vishnu as their god, or a Shintoist who named Ametarasu as their god) but who was in a majority of other ways in line with conservative politics, basing their support of liberty on the Constitution and the amendments known as the Bill of Rights, or would you oppose such an individual based solely on their confession being so far removed from Christianity?

I would appreciate the clarification, and I again thank you for your time.”

3 responses to “Pizza & Politics: Newt Gingrich hosted by the Dole Institute at the University of Kansas”